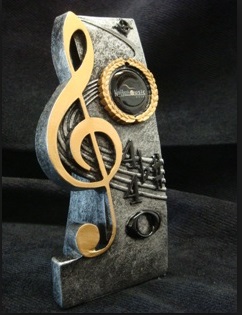 It was a magnificently Metal night for American rockers ALICE at the 13th Annual Legends Rock Awards as they took home seven of the night's top awards, including Best New Metal Band, best Rock Instrumental, and Hard Rock/Heavy Metal Album Of The Year. The band also heated up the stage with two performances and a pyrotechnics display that had the audience on their feet.


ALICE are no strangers to walking away from awards shows with numerous statues. Earlier this year they surprised everyone by winning in the Hard Rock category for Best New Hard Rock Release and Heavy Metal Video of the Year at the Gods of Rock Awards in Los Angeles, the first time a Heavy Metal band has taken that honor. The band stirred up a bit of controversy at the Gods of Rock Awards when they took the stage amid gasps of surprise and a few boos and negative comments from those who felt that the more mainstream Hard Rock band Daywalkers should have won in the category. Outspoken ALICE frontman David Arngrim told the crowd, award firmly in hand, "Well apparently enough of you were open-minded enough to vote for us in this category, because WE WON! It's great to know that our fan base is progressive enough to think outside the box and that they don't conform to labeling. We love you ALL and this award is for YOU!" The band exited the stage amid cheers and howls of approval from their devoted fans in the audience.


ALICE is nominated in four categories in the upcoming Bring The Noise Awards and is the crowd favorite to win in each. It will certainly be no surprise if they bring home another batch of statues. They are expected to win Heavy Metal Band of the Year, Video of the Year, Song of the Year/Heavy Metal category, and Soundtrack of the Year for Metal